We are planning a working bee for next Saturday 9am to 3pm 18 September 2021 at the Club rooms. Our priority is to wash the ceilings and walls within the club rooms. Many years of dust and insects have been found on them. If we have enough people we will also clean the up and downstairs of the Control tower.  Please let us know if you are free to help even if only for a few hours. A sausage sizzle will be provided for lunch. Cheers Greg Woodbridge

After some overnight rain, that had a few of us hoping it was too little to impact, we had a good field of 45 runners for the second Autocross. The track proved to be pretty quick, and we tried to keep water up to it to ensure some fast times. There was an issue with our normal flaggies due to some comms, but a few drivers/crew stepped up to help out. You know who you are, so thanks.

Unfortunately we had an incident during the day with Cameron garth tipping his lovely LA Lancer on its roof, and back onto its wheels, with a slow roll after the esses.  He drove the car in, but it looked a little second hand, and after a visit from the medic, seemed to be fine, just a little bruised, maybe.  Flags were out quickly, and two other competitor’s came to a halt nearby, prior to CoC Don Power getting to the scene, but as above, Cameron drove it back.  A reminder that it is motorsport, it is dangerous, and although not common, we do have accidents on occasions. Thankfully no damage to Cameron.

On paper E class looked to be a cracker with 12 entries, the majority WRXs, with one brand new Yaris Gazzoo Racing, bought out by normal EVO9 runner, Ant Bonnici. Most were interested in how this performed, especially Ant. The first two runs were pretty slippery, but around run 3 it started to get better, grip wise. At the end of Run 3, there was a tight battle for Outright, with Alan Wienert about 2 seconds up on Wayne Poulier, with Ant a couple back and Colin O'Brien keeping him company. The Yaris was doing pretty well. Next in line (still E Class) was Tim Crase in the 2.5 RS (no turbo, so just an underpowered WRX really...). Fastest 2WDs were Bondy, Ric Ganderton, Mark Phillips (in the family Falcon), Parkesy and Barry Clark, who was down a bit due to a witches hat. There were not that many penalties over the whole day, so generally the driving was on the bit that is the fastest.

As the day quickened up, it was not unexpected to see the 4WDs blitz the field, with Poulier and Wienert battling it out, and Bonnici matching on some runs, but just off their quickest pace. Ultimately Wayne did a 1:30.4 last run to secure the win, with a valiant effort by Alan to secure a safe 2nd. There was only a couple of seconds over 6 timed runs, so very close. Ant was third in the Yaris, with Tim Crase next best E class car. Best 2WD was Bondy with 6 runs in the Pulsar for his time. A Class was a first time win for Leyton Bond, after a near flawless drive with no witches hats, and being faster on every run, with Patrick Millar in the Ignis and Brendon Williams rounding out the podium. B Class looked like Barry Clark would take it out, but a late penalty gave the win to a lucky Ric Ganderton, who has a rerun after an incident, on a run that he had already spun on, 2.7 seconds the margin – 5 secs for a hat ,eh Barry. Rounding out the top three was Steve Emson in the Mk2 Escort, who had a pretty flawless day and took out best presented. C Class saw Robert Clark in the Cossie MK1 Mexico take the win from Bruce Dan. With favoured runners, Bond and Parkes, out with a hole in the radiator of the 1600 SR20DET, D class was open and Mark Phillips took the win in the well thrashed EB? Falcon, over ever young Lloyd Robertson in his BMW, with el Presidente Greg Woodbridge third, after losing a dorian early (and so getting a couple of runs untimed, meaning slowest in class plus 5 secs). Ladies saw long time WRX runner, Steph Muston, mixing it with ex RS , now WRX runner Nikki Duclos, with Maddy Dyba, Joanne and Hayley Phillips and Marilyn O'Brien completing the field. Ultimately Steph drove a good clean day to secure the win, while Nikki was close, but had a spin and 2 penalties late in the day and was lucky to get second, with Hayley Phillips only 1 second behind in third.

Lastly, but by no means least, were the Juniors with Billly O'Neil taking the win from Alex Niven and first timer Ashley McKenzie. JA was won by the sole competitor, Emma Crase, who piloted the same RS Impreza as dad (Tim) to an impressive 14th OR, to be the best of the Juniors.

Many of the normal protagonists were fast on the day, but for a drive of the day I would point out that newcomer, Ashley McKenzie, started the day with a 3:07, but by the end had dropped a full minute (and a bit) to be a 1:59.8. She had some help with dad (I think), but did not put a foot wrong, and is obviously a quick learner. Well done. 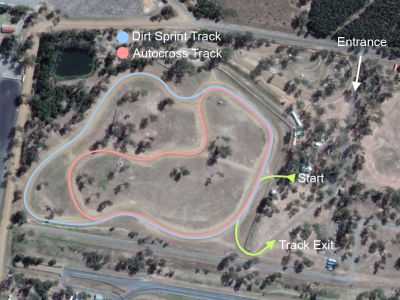 The track consists of two circuits : The Autocross track is 1km in length, 6m wide and has 8 corners of varying tightness. The Sprint track is 1.3km long, 8m wide and has 7 corners. The track surface is a decomposed granite construction, that gets grippier as they day runs. During the year, two championships are run, one for Autocross and one for Sprints, where drivers compete individually against the clock in a variety of classes.

For an aerial view, click this fb link, starts on the back straight and comes back around to the start finish, courtesy member Marc Wilson of the blue/white MkII Escort that adorns this site:)